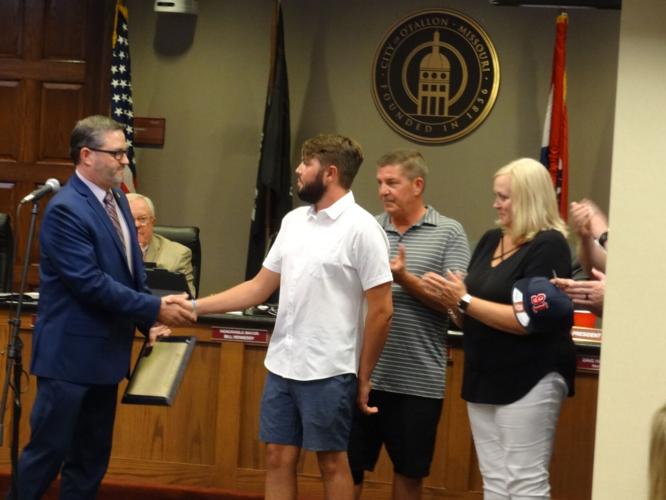 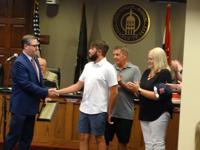 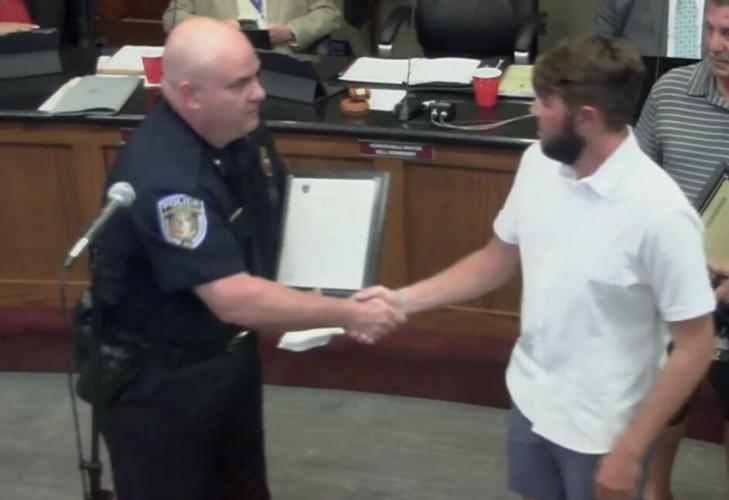 At 11:22 p.m. on Monday, July 4, a home in the Berkshire Downs subdivision in O’Fallon was on fire. Two friends, Michael Lawless and Joseph Hoffman, were on their way home and saw flames coming from the garage. Instead of passing by, ignoring the situation and not getting involved, they acted immediately.

Lawless and Hoffman called 911, knocked on the door and alerted the occupants about the fire. While one of the men alerted the adjacent neighbors, the other carried one of the occupants’ children to safety while escorting the rest of the family out of the house.

When EMS arrived a few minutes later, they found the garage fully engulfed in flames and the fire had spread into the home. The home’s occupants and neighbors were safe, because of the immediate actions of Lawless and Hoffman.

On July 28, their actions were lauded by the city of O’Fallon, the O’Fallon Police Department, and the O’Fallon Fire Protection District.

Council member Tom “Duke” Herweck (Ward 2) had requested recognition for the two exemplary citizens’ selfless and courageous actions. He read a proclamation from the city, the city council and the mayor, recognizing and acknowledging in detail what Lawless and Hoffman did that evening. Herweck then thanked them on behalf of the city and its officials along with the  Berkshire Downs subdivision.

Police Chief Frank Mininni presented Lawless and Hoffman with the O’Fallon Police Department’s Citizen Service Award. Mininni explained the criteria for the award is “performance of an outstanding act or service by a civilian that contributes to the saving of a human life, and/or substantially aiding a police officer in the performance of his or her duty.” He said these two citizens certainly met the criteria, and he thanked them on behalf of the city and the police department.

“This was the real deal. It was a real rescue,” Moore said. “The job was big when we got there, and the fire was well in progress. But they already had taken care of one of our biggest duties, rescue of the people.”

Mayor Bill Hennessy congratulated Lawless and Hoffman on behalf of 91,000 residents of the city.

"This is what makes O’Fallon such a great place to live,” Hennessy said.

Lawless was at the council meeting in person. However, Hoffman was not able to attend, so the proclamation and award will be delivered to him.

John is a news reporter covering O’Fallon. He has lived in the greater St. Louis area for 47 years, with 22 in O’Fallon. He is a graduate of UMSL evening college, with a Bachelor of Science degree in Business Administration and a minor in Political Science. John retired after a 46-plus year career in banking and insurance operations and IT, including his last seven years as an executive with international responsibilities and considerable travel to 25 countries on 5 continents. He and his wife have a daughter, son-in-law, and two grandchildren, also in O’Fallon. He is happy his grandchildren now can beat him in golf.

John is a news reporter covering O’Fallon. He has lived in the greater St. Louis area for 47 years, with 22 in O’Fallon. Prior to joining the Mid Rivers staff, John spent 46-plus years working in banking and insurance operations and IT.